Minden, NV– The week of September 10th 2012 Maxton Manufacturing Company exhibited at the
UNITED elevator industry event in Atlantic City, NJ.  During the event Maxton held the first QR-Code Scavenger Hunt for the industry which was designed to donate funds to the Elevator Escalator Safety Foundation (EESF) in the name of the winners not
to mention some cash for the top three participants.  Barring several obstacles along the way a winner was named.

The QR-Code questions were spread throughout the show floor waiting and ready for scanning and answering.
Here are just a few examples:

Who is the authorized distributor of Otis OEM elevator and
escalator parts located in CT that uses Maxton valves in their power units?

Maxton products can be found through this elevator package
manufacturing company South of the Twin Cities don’t ya know.  Who are they?

“With a fraction of the intended 25 players ready and willing to play…the game was on.  Nearly half way through it happened,
the building router maxed out with cell phone users and no one could get their phone to work.  The key tool and resource
for the game was down and disaster was knocking, but thanks to one very determined player the game was saved.   Thanks
again John, you’re not only a real trooper, but a most generous man,” said Karl Keller Marketing Director.

So what happened?   While presenting the $250.00 cash first prize and $450.00 donation to EESF, the winner made an impressive gesture by handing his cash prize to Barbara S. Allen Executive Director of EESF.  “This game was well worth the time spent…..I had fun with the challenges and learned some elevator history along the way.  If the money can save just one child it is well worth it,” said John Spinella of NEIEP. 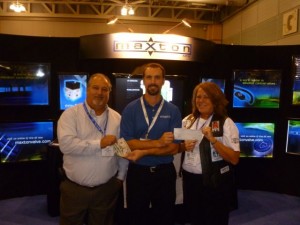 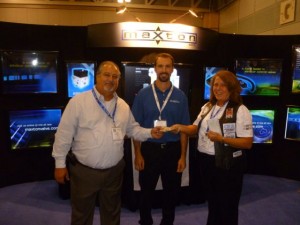 Karl said, “I want to thank Unitec, MEI, Bunge, Delaware, EESF, Schumacher, Draka, Quality, AFD, and ITI for hosting the codes in their booths.  All things considered the end was worth the unexpected challenges.  Who knows, maybe we can hit it out of the park next year.  I’m game are you?”
Maxton Manufacturing is a worldwide leader in elevator control valves since 1968 and holds the distinction as the largest single producer of elevator control valves in North America (Made in USA). We serve all your OEM, new construction, modernization, replacement/repair and educational needs when it comes to the hydraulic elevator products we provide. Visit https://maxtonvalve.comfor more about how Maxton can serve your elevator company.
###

This website uses cookies to improve your experience while you navigate through the website. Out of these, the cookies that are categorized as necessary are stored on your browser as they are essential for the working of basic functionalities of the website. We also use third-party cookies that help us analyze and understand how you use this website. These cookies will be stored in your browser only with your consent. You also have the option to opt-out of these cookies. But opting out of some of these cookies may affect your browsing experience.
Necessary Always Enabled
Necessary cookies are absolutely essential for the website to function properly. This category only includes cookies that ensures basic functionalities and security features of the website. These cookies do not store any personal information.
Non-necessary
Any cookies that may not be particularly necessary for the website to function and is used specifically to collect user personal data via analytics, ads, other embedded contents are termed as non-necessary cookies. It is mandatory to procure user consent prior to running these cookies on your website.
SAVE & ACCEPT